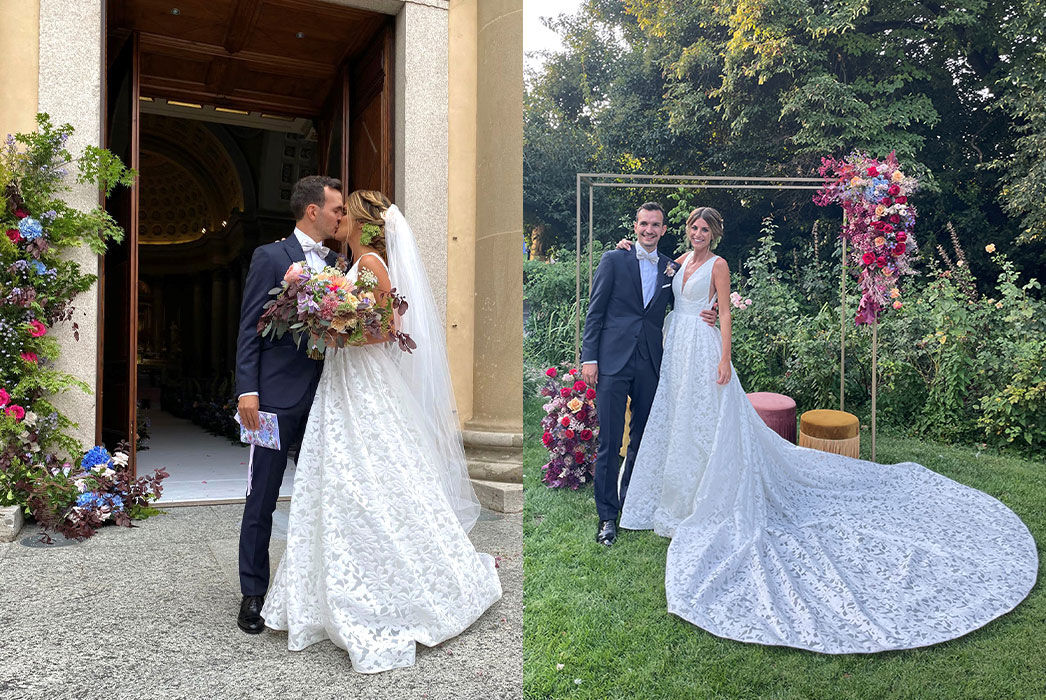 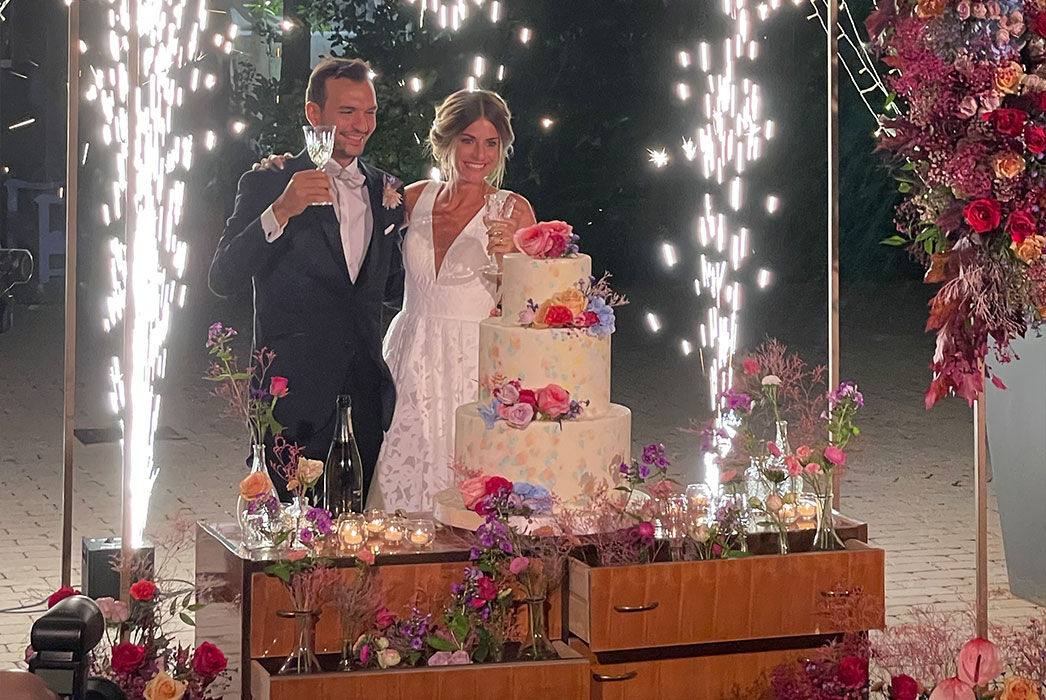 There are things that we’re sure we’ll never change our minds about, whether to do with weddings or life: flowers, venue, the person we love... but when it comes to choosing a wedding dress, you always need to be ready to try everything and let yourself be surprised! When I first tried dresses on in the Atelier, I thought I’d choose a full dress in tulle, but when I put on the Ginevra dress I changed my mind... It was the perfect one for me! We celebrated our wedding on 27 August 2021 at Lake Garda, a fairy tale location that we fell in love with straight away! But the most important thing was being surrounded by the people we love most, who made our day unforgettable and full of unique emotions that we’ll remember forever... because happiness is only real if it’s shared! 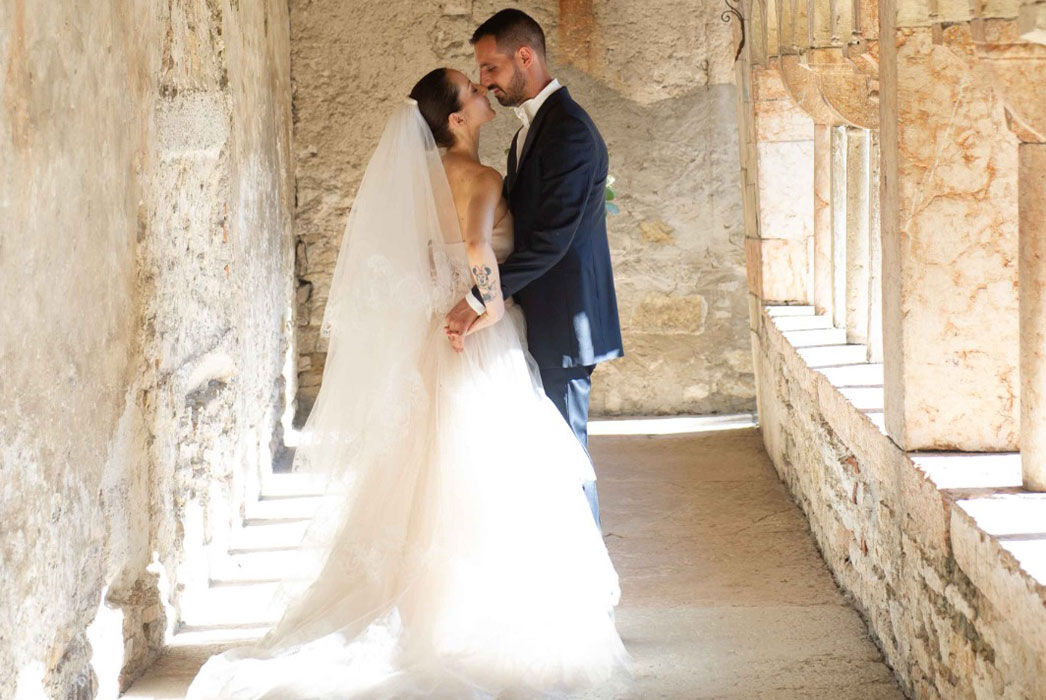 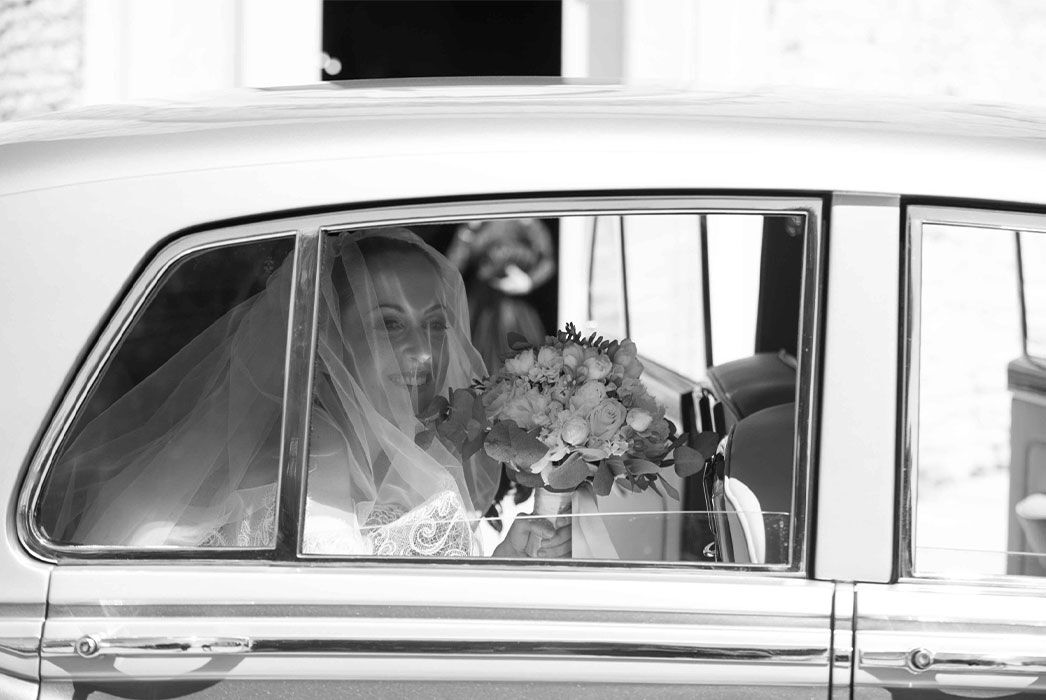 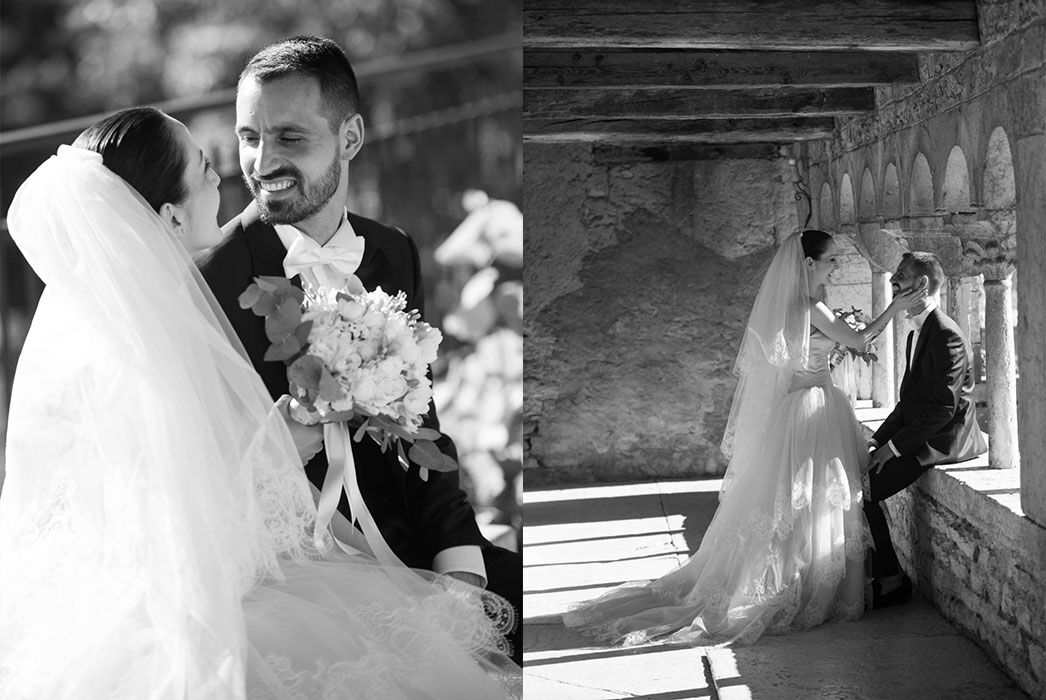 We got married on 26 June 2021, after a long wait because of Covid. We had to postpone and then wait, but the wait made us savour the meaning of every detail even more, making everything even more special! Every little thing was taken care of with great attention to detail, and it fully reflected my romantic spirit, and I had always had clear ideas on the dress too: tulle, lace and luxurious motifs would be the protagonists. And my sister also wore a dress from the Emé Party collection, a moment we shared that we’ll never forget! 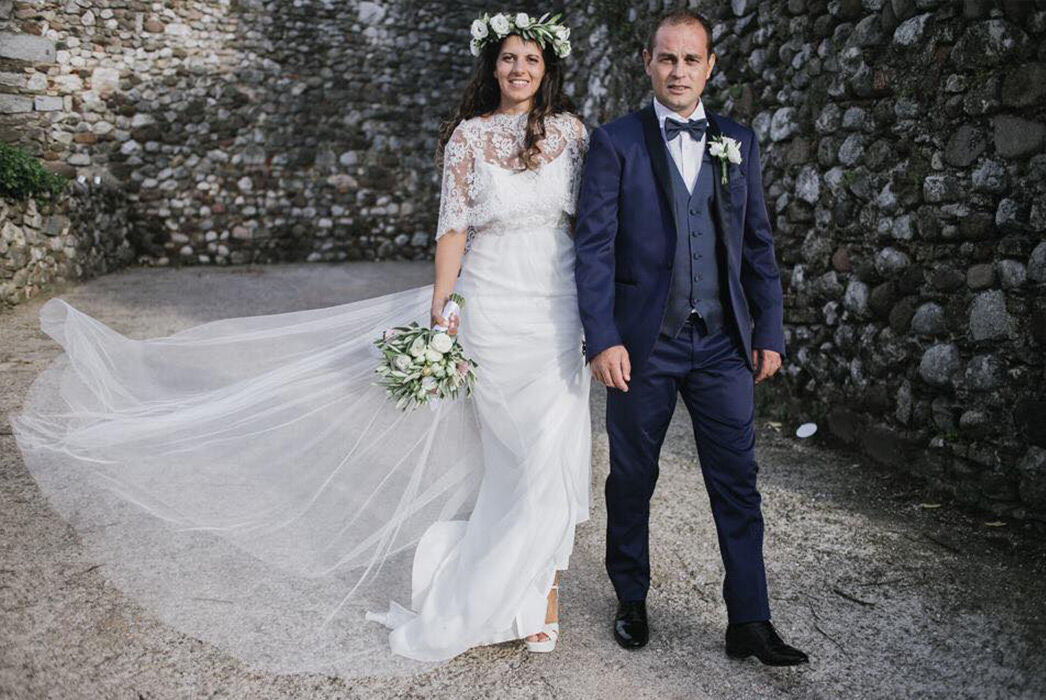 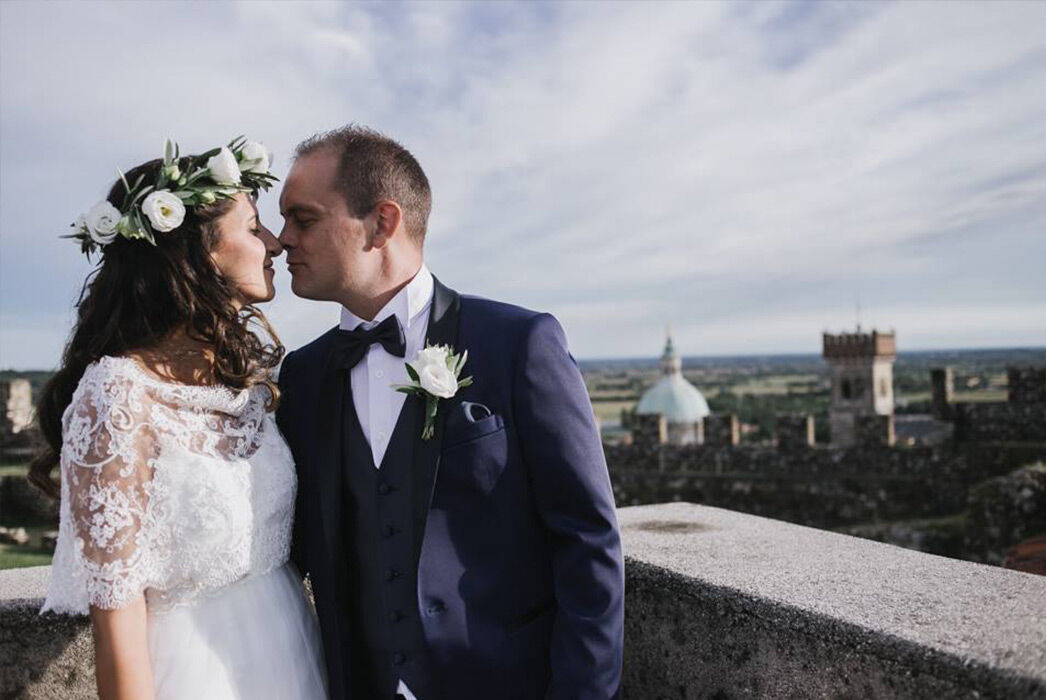 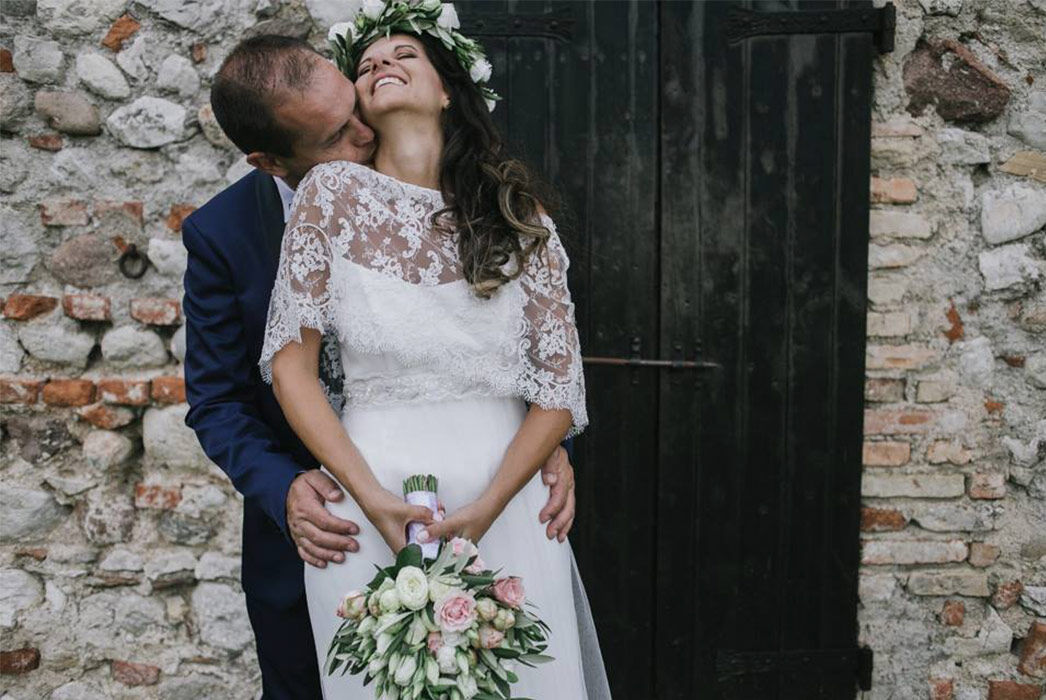 Our story is the classic fairy tale... One day, after seven very long years, the prince married his “princess”... And that’s how it was... We’re Silvia and Stefano and we got married at Rocca Visconteo Veneta in Lonato del Garda on 24th July 2017. I wanted the most classic dress, and even that was love at first sight, with teary-eyed approval from my mum and sister, and that’s how I chose my Shelly dress. A hippy chic dress, in perfect harmony with the theme of our wedding. 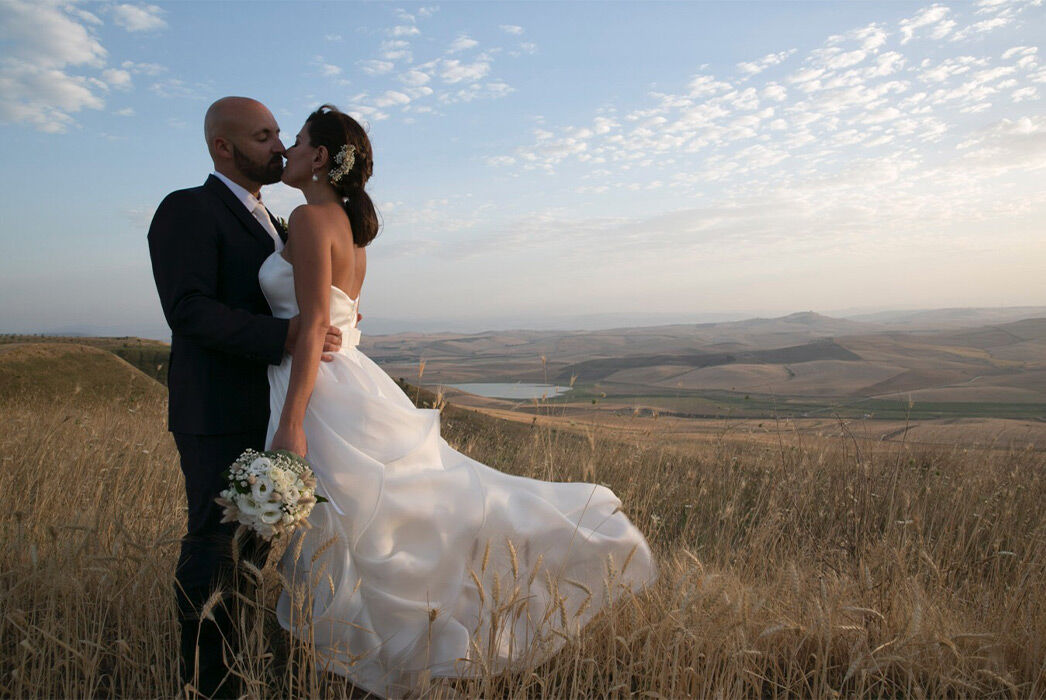 Luigi and I met six years ago, and on 30th June last year we promised to love each other forever in the spectacular setting of Murgia Altamurana. My “Amami” dress was the first one I tried on and I couldn’t have chosen better: simple but not predictable, it made me feel comfortable, I felt like a butterfly gently fluttering across the reception lawn and it meant I could go wild until the first light of dawn!

Do you want to be an Atelier Emé star too?

Share images of your wedding day to have the chance to feature in our gallery. A space dedicated to our Emé brides

Share the images of your wedding day to have the opportunity to be in the gallery. A space dedicated to our Brides

We have received your request and will contact you soon 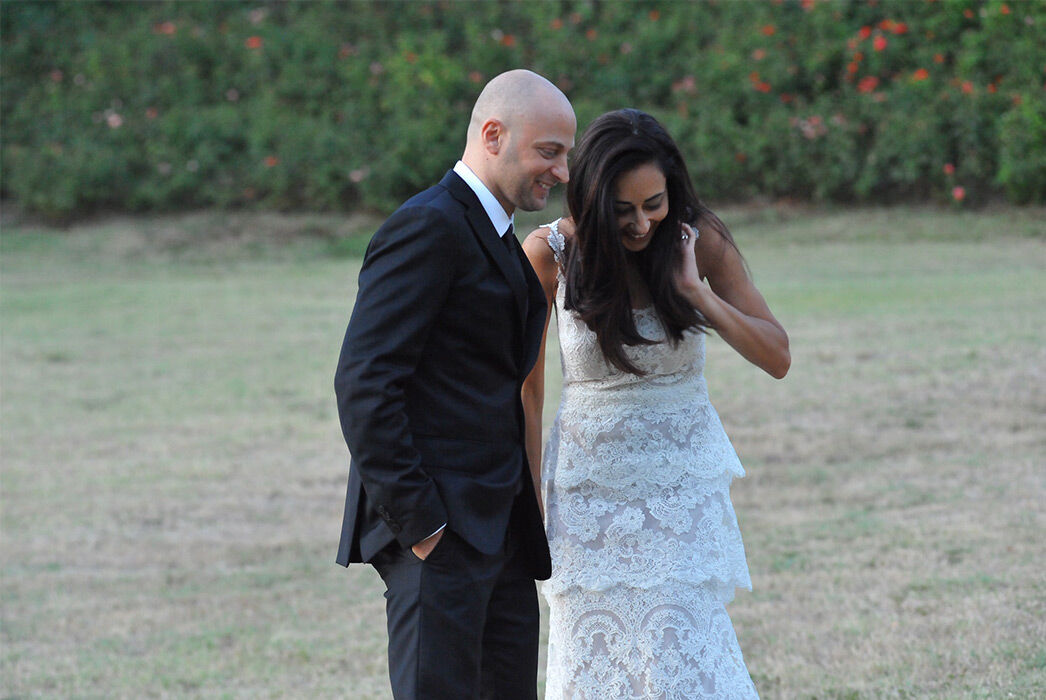 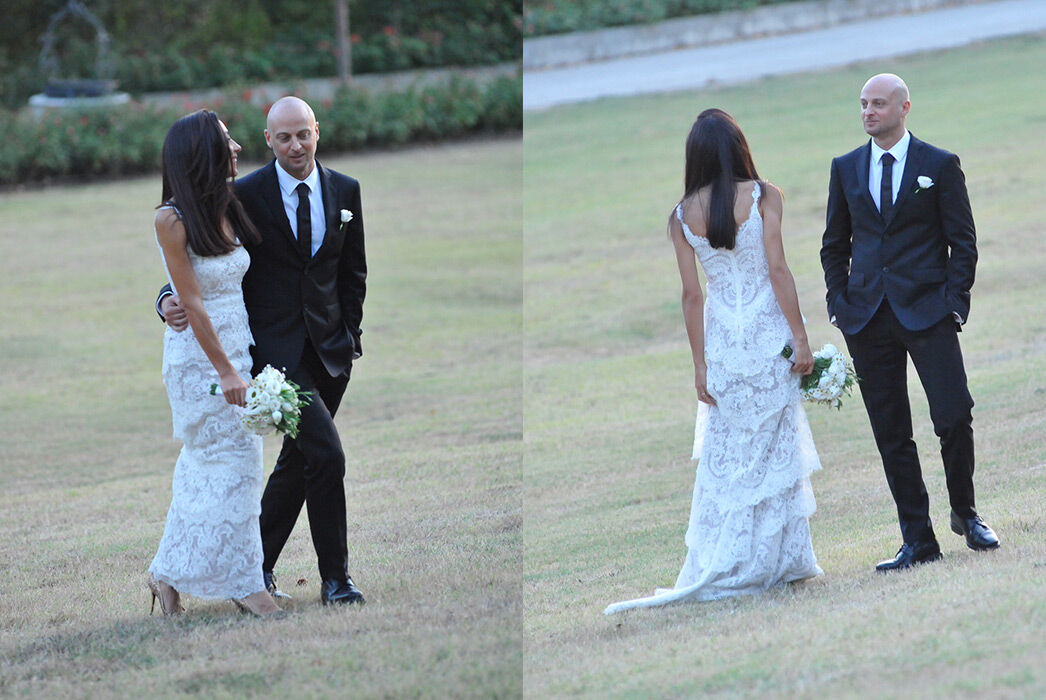 It was on a Rome to Boston flight in 2012, a few minutes before we landed, that we spoke to each other for the first time. I had a really bad earache because of the air pressure, and Andrea suggested a way I could alleviate it. I was going to America for a film-making course, while Andrea would be staying in Boston for work, for just two days. In those briefest of moments, before getting off the plane, he gave me his contact details by presenting me with his band’s latest album. We wrote to each other all summer and more, discussing films, sharing music, before meeting up in Naples. By chance, we went to a restaurant where a couple was celebrating their wedding anniversary, and when it was time for dessert, the waiter brought us a slice of the mille-feuille that the happy couple was sharing with everyone. My favourite and his favourite, but neither of us had ever told the other. Straight away we thought it was a sign, a good sign. We got married on 4th September two years ago. I wore the dress that I chose at first sight in the charming atelier in central Rome. We’ll always remember that precious day, full of smiles. 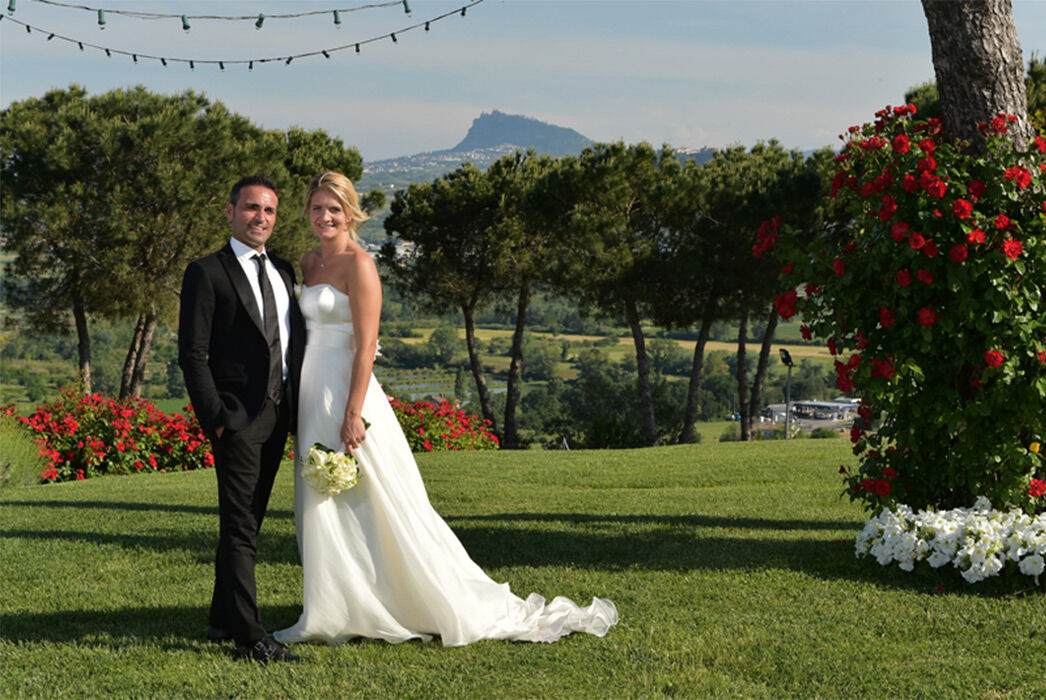 I met Matteo nine years ago, through work... And since then, we’ve never been apart. Our story, initially long-distance, grew day by day until we got married on 20th May 2018, consolidating our love even more... It was an incredible day, full of love and emotion that we will never forget... And I chose Atelier Emé for that day - I couldn’t have chosen anything better to accompany me on the most beautiful day of my life! Thank you to Atelier Emé, particularly all the staff in Ravenna.